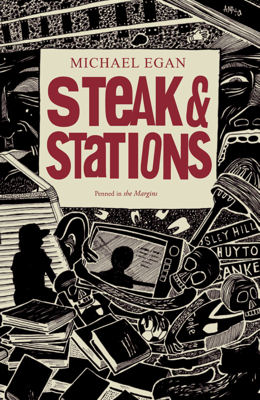 Reports from a landscape of contrasts and contradictions: of speed and consumption, haute cuisine and isolated railway platforms; from nocturnal inner-city encounters to rural wildernesses.

Steak & Stations reports from a landscape of contrasts and contradictions: of speed and consumption, haute cuisine and isolated railway platforms; from nocturnal inner-city encounters to rural wildernesses where schoolgirls ‘climb into the wind’.

In this exhilarating debut collection, Michael Egan has developed a style of his own, a conversational staccato that compels you to reconstruct his dark, fragmented micro-narratives piece by piece. Shot through with surreal humour, experimentation and a keen political sensibility, these poems offer a peep-hole into the mysteries of domesticity, relationships and modern society.

‘This is the work of an exciting, younger poetic voice taking on the challenge of how to write about change as it happens, about the past slipping away from us and the future still invisible to our senses. Read it and imagine.’
Eleanor Rees

“Steak and Stations comprises a fine array of sharply-observed, well-turned verses whose Scouse wit counterpoints their seriousness. The first part, ‘Steak’, offers breathless, long-lined poems which unfold fragmented narratives on the cusp between reality and imagination; whilst the latter sections, ‘Crossed Out Stations’, ‘Station Stop’ – where stations are both those of the cross and the railways of Merseyside and West Lancashire – contain tighter, more Objectivist structures. However visionary these poems become (‘I imagined god’s fist might plummet earthwards’) they remain thoroughly entangled with the quotidian (‘drinking four euro bordeaux with the spaniard’). Tea and cake is taken, urban foxes thread through nighttown, scenes are domestic and often erotic, and the Holy Grail gets abandoned outside a Liverpool Oxfam. These are poems in and of the world which nevertheless dream all night of the impossibility of the everyday: ‘the same only seen from uncanny angles.’”
Scott Thurston 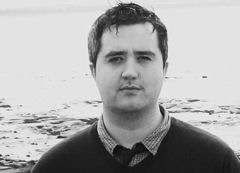 Michael Egan lives in Liverpool and is a member of Edge Hill University’s Poetry and Poetics Research Group. He is the editor of The Binturong Review. Michael’s poems have appeared in Erbacce, Great Works, Zafusy and Poetry Salzburg. A pamphlet, The River Swam, was published in 2005 and a second, Folklores, in 2010. Steak & Stations is his first full collection.

Find out more about Michael Egan