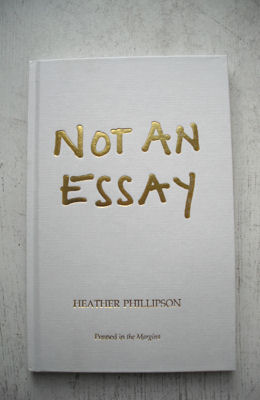 Cavalier, acerbic, droll and disconsolate, this experimental text by poet and artist Heather Phillipson is a self-incrimination, the noise of the intellect giving its mechanics away.

Published in a hardback, signed limited edition of 150

Composed as a single, fractured whole, Heather Phillipson’s NOT AN ESSAY is a tense handshake, momentary eye-contact, a rap on the cranium.

This text stakes out a bodily territory in which bodies are inflated and denied. Preoccupied with intimacy and its opposite, its narrator detours through the nightclub, the city graveyard, changing rooms, an overheated swimming pool, free jazz, public toilets, the in-house cinema, searching for – what? Can we still cope with torsos? Are we prepared for faces? Would we like to press together in the dark?

Cavalier, acerbic, droll and disconsolate, the text is a self-incrimination, the noise of the intellect giving its mechanics away. The chronicler is contrary, fallible – a body among bodies, a nervous system, an overwrought brain, the awareness of open pores, clothed in subjectively awful trousers.

“Falling between prose and poem, NOT AN ESSAY addresses Deleuzian ideas surrounding the body as object. Phillipson works through, a series of not-always-comfortable juxtapositions, the idea that our flesh and bones are alienated and indeed separated from the cognitive, social self.”
Oliver Basciano, Art Review

“The text is probing, provocative and tactile; intense, witty and beguiling.”
Sam Buchan-Watts, The Quietus

Heather Phillipson is an artist and poet. She received an Eric Gregory Award in 2008 and a Faber New Poets award in 2009. As an artist, she exhibits nationally and internationally. Recent venues include the South London Gallery, the ICA, the Whitechapel Gallery, Flat Time House, the Serpentine Gallery, Baltic Centre for Contemporary Art (Newcastle), Kunsthalle Basel (Switzerland), and g39/Halle 14 (Leipzig). Her pamphlet was published by Faber and Faber in 2009. Her debut, full-length poetry collection, Instant-flex 718 will be published by Bloodaxe in 2013.

Find out more about Heather Phillipson

Out now: NOT AN ESSAY