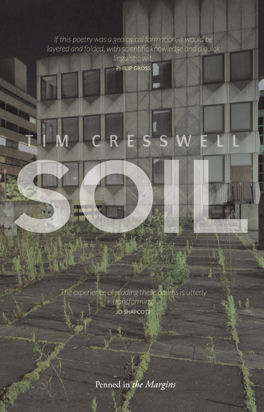 Soil is a striking debut by geographer and poet Tim Cresswell – rich, multi-layered, full of organic life and the compacted detritus of the city.

Geography and language collide in Soil, the debut collection of poetry by Tim Cresswell.

His poems delight in the strange and are often situated at the cusp of the natural and urban worlds. A fox climbs to the top of a London skyscraper; municipal trees are displaced from their mountain habitats; sandworts take root in abandoned mine shafts; and geological time is glimpsed through the ‘crushed structures’ of the city.

Cresswell is interested in hinterlands, the in-between places: airport lounges, urban parks, the muddy verge of a river. The title sequence is a startling examination of man’s relationship with the very stuff of earth, redeploying the language of science and archaeology with surgical precision and an innovative flair.

Already an acclaimed academic and human geographer, this book introduces Tim Cresswell as a significant new poet of place, and our changing relationship to it. Soil is a striking debut – rich, multi-layered, full of organic life and the compacted detritus of the city.

‘If this poetry was a geological formation, it would be layered and folded, with scientific knowledge and a quick linguistic wit, with echoes of folk song, unsentimental ecological awareness, word games and a sharp but not unkind eye on the everyday – all this, but metamorphic too, fused  by human warmth into a memorable voice.’
Philip Gross, Winner of TS Eliot Prize 2009

‘Tim Cresswell’s poems unsettle.  They cause us to relocate ourselves poem by poem as we encounter contemporary landscapes, airports, city streets, domestic interiors, layered in Cresswell’s unique geological, poetic timeframe, and all made strange and testing by his brilliant and spare language. The central, major title sequence ‘Soil’ works through rhythms of space and light which stretch time so that the experience of reading these poems is utterly transforming.  A distinctive, important new voice is announced in this debut collection.’
Jo Shapcott, Winner of Costa Prize 2010

‘It’s the liminal borderland that stirs the best from Cresswell … He plays the connoisseur of the street, of urban language … this is an enjoyable book with an unusual take on the urban world, suggesting that our cities ought to be seen as ‘unlike melancholy”
Martyn Crucefix, Poetry London

‘Often startling, the poems offer thoughtful explorations of the world and our place in it.’
Northeastern Magazine

‘This is poetry that is in turns, thought-provoking, evocative, moving, light-hearted in places, and so real that I could feel the soil under my fingernails – and not the dirty soil of wastelands but the earth soil from which beautiful things grow.’
Sarah James 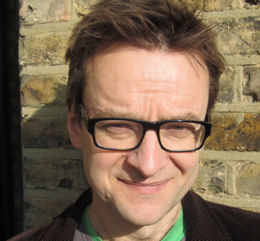 Tim Cresswell was born in Cambridge in 1965 but didn’t stay there long. Since then he has travelled, first as part of an Air Force family and then as a student and academic. As a geographer he is the author of five books on place, mobility and other key ideas in geographic thought. Since 2006 he has been Professor of Human Geography at Royal Holloway, University of London. He lives with his wife and three children in Acton, west London, but that is about to change as they are about to relocate (again) to Boston where Tim will transform into Professor of History and International Affairs at Northeastern University. Soil is his debut collection of poems.

Find out more about Tim Cresswell

“Why was there this fence, a symbol of territory and separation, in this unlikely place?” – Tim Cresswell on Svalbard and poetry

Beyond the book: Announcing our 2015 Programme