Cut and splice: Hannah Silva sifts through the schlock of language

From politics (Opposition) to pseudo-science (Total Man), Hannah Silva has a track-record of confronting big ideas and revealing the corruption of speech through her unique performances. In her new show, Hannah takes on feminism and the sexualised body. Nick Murray finds out more.   ‘Schlock’ is typically used to describe something worthless, throw-away. Why pick […]

From politics (Opposition) to pseudo-science (Total Man), Hannah Silva has a track-record of confronting big ideas and revealing the corruption of speech through her unique performances. In her new show, Hannah takes on feminism and the sexualised body. Nick Murray finds out more.

‘Schlock’ is typically used to describe something worthless, throw-away. Why pick this as the title for your new piece?

‘Schlock’ is the word the novelist Kathy Acker used to describe writing such as true-life stories in magazines, science fiction, horror stories and pornography. She wrote by splicing together ‘schlock’ with ‘good literature’. When I was wondering what today’s schlock might be, I thought of Fifty Shades of Grey . I like the word. I like the exclamation mark at the end of it.

What is the show about? And how has it emerged?

Schlock! is a performance composed of Fifty Shades of Grey by E.L James and In Memoriam to Identity by Kathy Acker. Through cutting up and splicing these texts together, strange narratives emerge. It is about sex, identity, motherhood, the female body, and death. I explore the material using vocal sounds and poetry, working with a loop pedal to layer up voice and meanings. I weave British Sign Language into the work as a visual layer that also starts to open up my work to d/Deaf audiences. 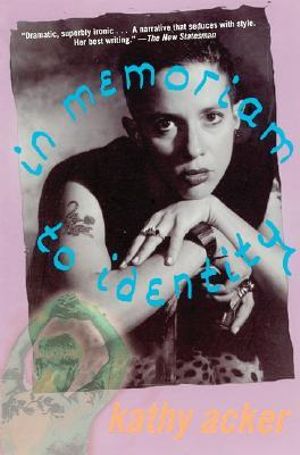 I came across Kathy Acker’s books in Dartington College library, and her way of writing made sense to me, in spite of the fact that she subverts expectations of what a ‘novel’ is, or perhaps because of it. Nothing is quite stable, and the female body is a constant presence. Her books made an impact on me when I was exploring ways of writing myself; it took a while to throw off a kind of surface influence. Now I feel ready to go back to her books and write through them, and to write more deeply about sexuality and the female body. I’m using my work with sound and voice to explore these writings from the inside, from the gut. It’s a more emotional project than my previous work.

How have you found the process of mixing a cut-up/collage style with your own writing?

I don’t really see it as mixing other people’s writings with my own. I’m not sure what ‘your own writing’ really means. Does anyone ‘own’ writing? We all share, and with this project I’m more consciously aware of sharing with Kathy Acker and E.L James. It’s by writing through our shared vocabularies that I manage to say what I couldn’t have imagined. How are you bringing together E.L. James and Kathy Acker?

Sometimes half a line from one book is merged with half a line from another. Sometimes I will take one line and break down the words into sounds and then use those sounds in other contexts. Having a book on Kindle means I can perform searches for particular words, it offers a different way of intervening in a text (there are 75 instances of the word ‘pain’ in Fifty Shades of Grey – if you count ‘painting’ and ‘paintbrushes’). I hope I’ll be able to have fun with some of the quirks in Fifty Shades, such as the main character’s schizophrenic conversations with her ‘inner goddess’ and ‘subconscious’. But so far it’s quite dark and disturbing – particularly when I change the word ‘dominant’ to ‘child’ and ‘submissive’ to ‘mother’.

Ackers’ visceral writing style seems to be at odds with James’ watered down prose. Is there a ‘stance’ that the show takes in regards to this?

If I had a particular stance then I wouldn’t need to make the work. Making a performance piece is a kind of investigation into a problem, or a world, or an emotion. I’m not analysing either book, or presenting an argument. I’m using them to make something different. Something that is concerned with sex and motherhood, that uses language from those texts to worry the subject. I don’t know exactly where I stand in it all, but occasionally I catch a glimpse of myself.

What can audiences expect?

You see a woman, surrounded by pages torn from books. A torch lights an elbow, or a knee… a body, parts of a female body speaks… she tells a story through a silent language. She’s looking for words and meanings, for a way of reconstructing a body of text. There is a rich and strange soundscape, alongside sign language and projected text. This work is as much about the landscape of the audience’s imagination as it is about concrete stage images. I hope it will connect with the audience on an emotional, even physical level. Acker wrote: ‘if the world in which we live is sick, we have to live in the imaginary’.