Judging a book by its cover: an interview with Ben Anslow

The adage goes ‘Don’t judge a book by its cover’ – though if you did, you’d think that any tome wrapped in one of Ben Anslow’s covers was a masterwork. Early this year, Ben joined the Penned in the Margins team as go-to cover designer. Having previously produced striking images for publishing companies such as […]

The adage goes ‘Don’t judge a book by its cover’ – though if you did, you’d think that any tome wrapped in one of Ben Anslow’s covers was a masterwork.

Early this year, Ben joined the Penned in the Margins team as go-to cover designer. Having previously produced striking images for publishing companies such as And Other Stories and Penguin, his innovative style has helped several classics and new books shine through. Now his clean lines and smooth block colours grace Penned titles such as the anthology Mount London and, most recently, Speculatrix by Chris McCabe. Nick Murray caught up with Ben to skim the surface of what cover design entails and how the recent Penned in the Margins covers have come to be.

Your first Penned cover was for Mount London and it brought a whole new aesthetic to the Penned body of work. What was your inspiration behind that book?

The cover for Mount London started with Tom [Chivers] asking me for “something in the style of a vintage travel poster”. Most designers will likely know what this is in reference to – namely the Work Projects Administration travel ads from the 30s and 40s. 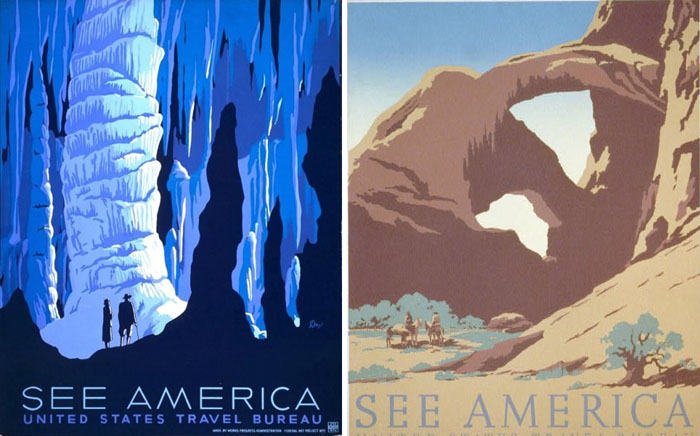 Thinking back, I don’t really remember requiring that epiphanic moment with this cover, because I felt most of the groundwork was already in place. I’d been set this task of visualising the book’s title, using the WPA posters as a style guide, and I just needed to work out how I was going to do it.

I had all this great source material at my fingertips to borrow from, so once I had worked out how it was going to look, it almost designed itself.

One inspiration for how it turned out was the format. The fact that it was going to be a hardback with french flaps made me see how I could create this panoramic landscape that would wraparound the entire dust jacket.

What are the techniques or methods you utilise to work out how a book cover should come together?

Often budget and time restraints can determine how a cover can end up looking. If there’s a small budget, photography might be off the menu. If there’s not much time, hand-rendered methods and general experimentation may not be possible.

So once I know what the restraints are (if any) I can think realistically about what kind of things will be possible for this book. After that, it’s all about research and ideas.

I do enjoy working to restraints though. That’s when I think you’re truly tested. If you’re determined enough, then something good should come out, no matter how little amount of resources or time you have at your disposal.

The covers for Mount London, Marginalia, In the Catacombs and Speculatrix are all wildly different. How do you and Tom work together to create the final image?

Tom will sometimes have done his own mock up of the kind of thing he imagines working, which is always interesting for me to see, and makes for a good starting point. Or we’ll discuss some other visual references he likes the look of.
Obviously existing book covers are a good source for narrowing down the kind of thing you’re wanting to achieve. Most of the time I’ll be given the manuscript to go through and look for ideas.

Then it’s really just a process of me generating visuals, sending them to Tom, he’ll highlight which ideas are working and I’ll keep pushing those forward. This might happen three or four times before we’re seeing a potential final cover.

Lots of email-answering, sketching, note-making, researching, organising, troubleshooting and general ‘plate-spinning’ — and then hopefully, enough time for a bit of designing.