Hello and welcome to the Penned in the Margins 2014 year review. This is our chance to look back on what has been a big year for this small company, with more productions than ever before and some very exciting news for the future. We started the year deep in the back office, preparing for […]

Hello and welcome to the Penned in the Margins 2014 year review. This is our chance to look back on what has been a big year for this small company, with more productions than ever before and some very exciting news for the future.

We started the year deep in the back office, preparing for a hectic schedule of productions and books. In January we visited York St John University with Luke Kennard, and in February we held the first of two events called Talking about Death at Toynbee Studios, part of our two-man miniature epic The Shroud.

February brought the announcement of our full Spring/Summer programme and a shiny new print catalogue, produced using a risograph machine and designed by our very own production assistant Nick Murray. We also received the fantastic news that Hannah Silva‘s Total Man, a commission for the Electronic Voice Phenomena project, was shortlisted for the Ted Hughes Award for New Poetry.

In April we nipped up to Middlesex University to give a talk to students about poetry publishing, and Siddhartha Bose and his director Russell Bender made the slightly longer journey to Salford to record an excerpt from The Shroud for BBC Radio 3. 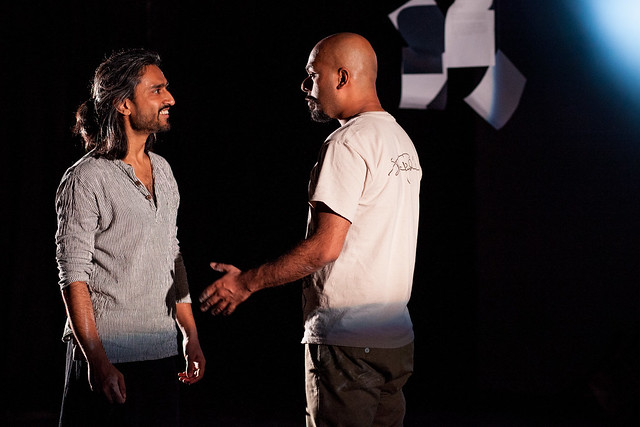 In May our public programmes started in earnest with a three-night preview run of The Shroud in London, one in Norwich as part of the Norfolk & Norwich Festival and one in Gateshead with Gem Arts. Starring Siddhartha Bose and Avaes Mohammad, The Shroud is a meditation on grieving, myth and ritual, which will return as a full production in 2015. Later in May we launched our major new anthology Mount London at Rough Trade East. Co-edited with Martin Kratz, Mount London is a collection of essays and stories charting ascents of the capital’s hills and summits, featuring the likes of poet Helen Mort and place-hacker Bradley Garrett, and Martin if you’re listening, you left your crampons in the office.

In June we brought together four of our favourite poets – Ross Sutherland, Hannah Silva, Simon Barraclough and Inua Ellams, together with experimental musician Leafcutter John – and let them loose in a hauntingly transformed Keats’ House in Hampstead, with audiences being led around in near darkness for an event called Negative Capability. We also curated a day-long programme of water-inspired spoken word as part of The Museum of Water at Somerset House.

In July we took Negative Capability onto the streets of Ledbury in Herefordshire for their famous Poetry Festival, where we also premiered Claire Trevien‘s one-woman show The Shipwrecked House, based on her Guardian First Book Award longlisted poetry collection. Back in London Caroline Bergvall, Ingar Zach and Thomas Koppel brought their immersive multimedia performance Drift to a packed Purcell Room as part of the Southbank Centre’s Poetry International Festival. And we released an incredible new book of creative non-fiction by Chris McCabe, In the Catacombs, the first instalment of an ambitious project to map London’s Victorian cemeteries – the Magnificent Seven – in search of a great, lost poet. It was also in July that we received the news that Penned in the Margins has been selected for the Arts Council’s National Portfolio, which provides core funding for three years from 2015.

After a hard-earned break in August, including a fruitful research trip to the Edinburgh Festival, we returned in September to host a big party at Rich Mix in London to celebrate ten years since the first ever Penned in the Margins event in a converted railway arch in south London. A stellar line-up of writers and performers serenaded our audience of friends, fans and invited dignitaries. There was a new book, the commemorative anthology Marginalia. And there was a brilliant, book-shaped cake made by our resident baker Hannah Hood. 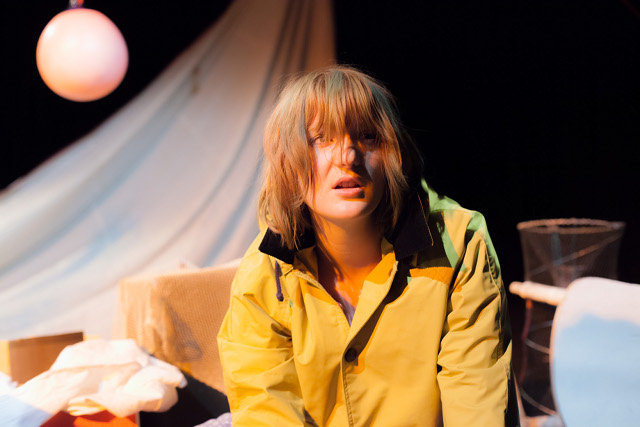 September and October marked the height of our touring season, with two shows – The Shipwrecked House and Caroline Bergvall’s Drift – going on the road, from Exeter to Newcastle and many places in between, and garnering plaudits along the way including Exeunt Magazine who described Drift as ‘mesmerising … a multi-millennial mashup of sea stories’ and Claire Trevien in The Shipwrecked House as ‘completely in control of, almost literally, every molecule in the atmosphere’.

Also in October we were proud to release our first ever full-length novel, Midland – an experimental anti-history of Birmingham by the mercurial writer and musician Honor Gavin. In November we upped sticks to the Suffolk coast where Hannah Silva premiered her radical new performance work Schlock! at the Aldeburgh Poetry Festival. Over two hundred and fifty festival goers packed into the Britten Studio at Snape Maltings for what promises to be one of the most talked-about productions of 2015. The year ended with two new books of poetry: The Hard Word Box by Sarah Hesketh, which documents her time as Writer in Residence at a care home for people with dementia, and Speculatrix by Chris McCabe, a hard-edged volume of historically inflected verse launched in the appropriate setting of a medieval crypt.

We’re all off now for the Christmas break, but we’ve plenty in store for 2015 including new books by Simon Barraclough, Ryan Van Winkle, Naomi Booth, Tim Wells and more; a new reading series, The London Quarterly; alternative literature and technology club night The EVP Sessions; and the start of a major two-year project inspired by the medieval epic poem Piers Plowman.

We’ll also be keeping our fingers crossed for associate artist Ross Sutherland who is shortlisted in the Arts Foundation Award for Spoken Word, with the winner announced in January.

Until then, thank you to our readers, audiences, partners, funders and of course artists for all your support this year. And a Merry Christmas.