Spacecraft came about when I realized I’d written quite a number of poems exploring ideas of emptiness and absence. Partly these arose through the loss of several people close to me, but some arrived also from an interest in Zen Buddhism and I’ve long been inspired by writers like D.A. Powell and Lee Harwood who […]

Spacecraft came about when I realized I’d written quite a number of poems exploring ideas of emptiness and absence. Partly these arose through the loss of several people close to me, but some arrived also from an interest in Zen Buddhism and I’ve long been inspired by writers like D.A. Powell and Lee Harwood who work hard at exploiting the white silence of the page through ruptured lines, poems in columns and unusual stanza forms.

I noticed that many of my pieces explored absence and emptiness not as simple lacks but as strangely productive, almost magical forces, or were in some way about crafting space. This realization helped me choose which poems would go into the book, and shaped both the later poems I wrote and my editing process. I liked the idea of a deeper structure emerging through the way many of the poems took different perspectives on this central theme, echoing one another, or disagreeing.

Once I had the title Spacecraft I started thinking about the sections. Deciding that there would be ten poems in each helped me map out the book, and forced me to be ruthless, with each poem having to earn its keep. The first section, ‘Flying Machines’, is the most diverse, with the poems linked not only by space but by notions of flight in a broad sense. Lovers and snowflakes swing through the air, a medieval scribe becomes a floating exclamation mark and the narrators of two contrasting pieces focus on absent figures as they fly over the desert, which I think sets up the collection’s focus on emptiness.

The second section, ‘Navigating a Space’ is focussed on one particular absence, that of my first partner who passed away from an AIDS-related illness. Grief affected me in unusual ways, and in these poems it often has a transformative effect, a warping of perception, a remaking of reality where a person carries a door on his back or views memories as waxen blobs in a lava lamp.

‘The Space Age’ then moves outward into a historical spectrum of absences and acts of crafting space, with a number of elegies for people who remodelled their surroundings like Lee Harwood and Alan Turing, and surreal pieces about things like hole-digging competitions.

Lastly, ‘Living Space’ is focussed on modern day life in Brighton. It adopts a very different perspective. I was struck by the late geographer Doreen Massey’s conception of space as not something we pass through but something entwined with stories we are all living out in the present. This section has lots of poems about being inextricably bound up with local cityscapes and landscapes, about being in love with the fabric of the world as well as another human. After so much emphasis on emptiness and loss, I wanted the reader to experience previously unthought of connections, vitality, possibilities. There is much door imagery across the book – hence Ben Anslow’s beautiful cover image – but the final poem is all about being open to the unknown, to being remade.

Across the collection there’s also a particular emphasis on obsolete English words like ‘flother’, ‘flittermouse’ and ‘stirious’, as well as lost letters of the alphabet and buried etymologies. I was interested in the idea of language having ghosts and absences of its own, and the uncanny life that a ‘dead’ word can possess again when it’s spoken aloud, how its work is never quite finished. Crafting language always involves crafting spaces, and not just the ones between words or letters, but the ones behind them, the array of silences that structure the present, that create and complicate who we are. 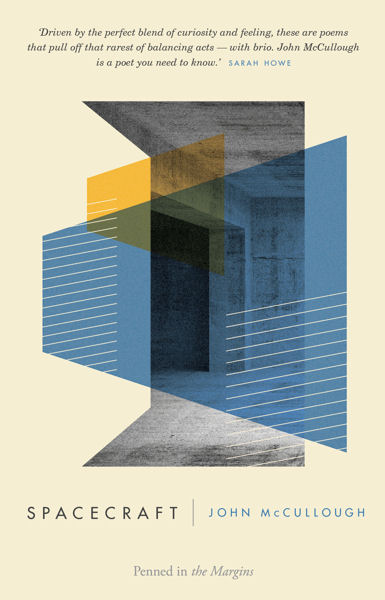 Buy Spacecraft by John McCullough in our online shop