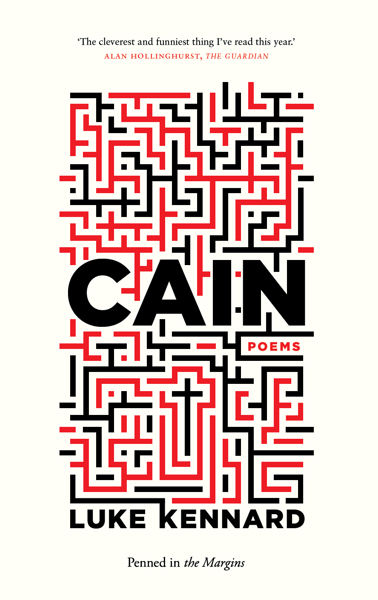 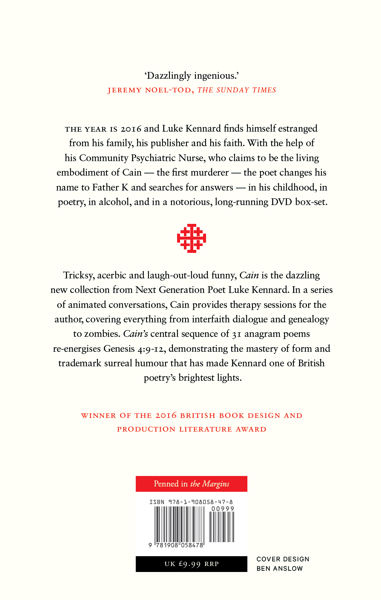 The year is 2016 and Luke Kennard finds himself estranged from his family, his publisher and his faith. With the help of his Community Psychiatric Nurse, who claims to be the living embodiment of Cain – the first murderer – the poet changes his name to Father K and searches for answers – in his childhood, in poetry, in alcohol, and in a notorious, long-running DVD box-set.

In a series of animated conversations, Cain provides therapy sessions for the author, covering everything from interfaith dialogue and genealogy to zombies. Cain‘s central sequence of 31 anagram poems re-energises Genesis 4:9-12, demonstrating the mastery of form and trademark surreal humour that has made Kennard one of British poetry’s brightest lights.

Published in a new paperback edition with two tone interior.

Luke Kennard is an excruciating observer of the southern cringe. Cain is his best book yet, and ought to bring him coach-loads of new readers. At its heart is a dazzlingly ingenious, anagram-driven sequence of prose poems about an imaginary American television series, which reads like Nabokov watching Netflix with the poet John Ashbery.
Jeremy Noel-Tod, The Sunday Times

Playful and excoriating ... Kennard is a master of the unexpected.
Leaf Arbuthnot, Times Literary Supplement

I was dazzled by Luke Kennard’s Cain – its central sequence of 31 prose-poems, each an anagram of the same few verses of Genesis, is the cleverest and funniest thing I’ve read this year.
Alan Hollinghurst, The Guardian Best Books of 2016

Kennard has always been a writer with deconstructive, avant-garde tendencies, and these dazzling performances take us further into the treacherous materiality of language than ever before.
Dai George, Poetry London

Kennard dramatically repurposes the skill he exemplifies better than any poet writing today; he makes deconstruction into a profoundly creative act. Like listening to John Berryman’s The Dream Songs being remixed by Stewart Lee, Kennard elevates himself, his craft and his peers by masterfully undermining them.
Phil Brown, Huffington Post

With its humanity and depth, Cain is likely one of the most compelling and perturbing collections to be published this year.
Charles Whalley, Literateur

Incredibly inventive, funny, varied and individual; you're not going to read many collections like this.
Maria Taylor, Under the Radar

Luke Kennard has published five collections of poetry. He won an Eric Gregory Award in 2005 and was shortlisted for the Forward Prize for Best Collection in 2007. He lectures at the University of Birmingham. In 2014 he was selected by the Poetry Book Society as one of the Next Generation Poets. His debut novel, The Transition, is published in 2017 by Fourth Estate.