Beyond the Monkey Puzzle to the Tree of Heaven: Chris McCabe on writing Cenotaph South

The process of writing Cenotaph South could be visualised more as a growing tangle of underground rootstalks than a crescent arc from its conception to end. I began with an objective plan – to write a book about the dead poets of Nunhead Cemetery – and ended in a creative frenzy akin to Robert Graves’s account of how poets fall under the trance of the White Goddess. The fact that the Goddess herself became a central figure in the book reminds me of how far I’d drifted, by then, into my own mythopoeia.

Rather than resisting the unpredicted and random events that the book threatened to become entangled in, I gave into them, astonished by how the links seemed inevitable. The journal I kept to document my mother’s treatment for breast cancer became a part of the book. As did the map showing the poetic activity which had taken place for centuries around Nunhead Cemetery. This showed an incredible alumni of poets associated with south east London including Robert Browning, Barry MacSweeney and B.S. Johnson. In some cases this outside map began to fold into the landscape of Nunhead Cemetery itself, where Browning’s mother is buried and where he’d walked (before it was a cemetery) with his father, reading Dryden’s Essay on Satire. A mile down the road on Peckham Rye I made the discovery – through Blake’s own poems – that the tree he saw his angel in was certainly a hawthorn. It wasn’t hard to imagine the young Blake – who’d walked from Soho as a boy to see this angel – continuing up Nunhead Hill, just a few decades before the hill was claimed by the London Cemetery Company and opened for burials in 1840. 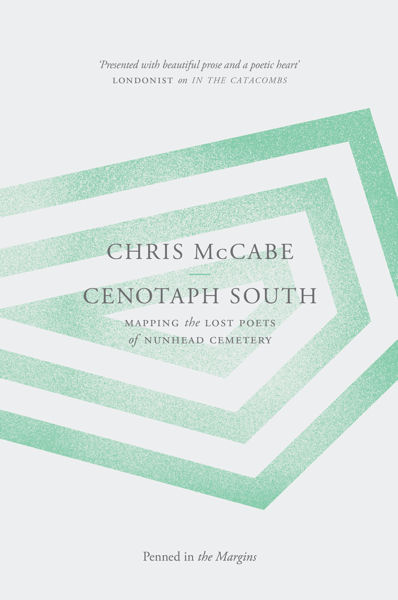 This morning I opened the door to the house I stay in through the week in and saw a map titled An Illustrated Map of Remarkable Trees in Dulwich. A year ago I’d have picked this up looking for further poetic connections. I had the time: a six month sabbatical from work made possible by an Arts Council grant. Walking for hours. Meeting with eccentric cemetery obsessives. Long hours bunkered in library reading rooms. There was one morning when I was out on Peckham Rye Park and a colleague, out walking her dog, saw me filming the trickling River Peck on my phone. I explained that I wanted to capture it just before it went underground, where, it’s been argued, visions of ghosts are more likely to happen. Dead poets as humidity vapours. Blake’s atomised energies written into the landscape. Orbs rising up into the trees.

I spent whole days on the search for Blake’s original hawthorn which could conceivably still be living. Hawthorns can live for 400 years and as Blake was only here in 1769 (‘only’ being the word – ‘Hold Infinity in the palm of your hand. And eternity in an hour’) the tree could well still be there, in a garden overlooking a shed or shadowing a renovated house. An Illustrated Map of Remarkable Trees in Dulwich carries no mention of the hawthorn. There is a Monkey Puzzle and Tree of Heaven, but no mention of the tree that became the symbol of Cenotaph South. Anyone living within a few miles radius of current Peckham Rye (which is smaller than in Blake’s time) would do well to keep their eyes open for the tree. It’ll be distinct for the ‘bespangling’ of the leaves and branches, as Blake’s first biographer Alexander Gilchrist described it. In the growing tangle of connections there was an inexplicable synchronicity in that the hawthorn was also the tree that I’d planted, with my family, in memory to my father, just as I was setting out on writing the book and had no idea that I’d discover this Blake link. Writing this book began to feel as if I was walking into a symbolic landscape that was already formed and all I had to do was begin to notice what was happening, and write it down.

I walked for hours, looking. On a sultry September day I went out with Reggae Reggae Sauce man and musician Levis Roots, and Christine Vinall of the Blake Society, to record our findings for a Radio 4 programme called A Vision on Peckham Rye. The brilliantly creative reducer Natalie Steed got us to lie down in the middle of the rye, on our backs, and describe what we saw happening in the branches above. Levi saw the passing clouds as elephants. I pictured the afterlife.

Looking at this map of Remarkable Trees takes me further into the territory of symbolic links and connections. There’s Dulwich College, where I discovered that Barry MacSweeney – acerbic and sentimental – gave his last ever reading. Dulwich Common, where I further followed the trail of Robert Browning who’d go there to eat raw flowers. And the Dulwich Estate, built on the money of poetry, bear-baiting and prostitution, from which Edward Alleyn (Alleyn Road is on the map) took his earnings from the Jacobean Banskide and set up a College for God’s Gift as a charity. I gave a reading at Dulwich College as I was writing the book, following nervously onto the cavernous oak stage that Jo Brand had just come off. How do you follow that? Well, with poetry, which has always been at the heart of Dulwich. When you get to the college the portraits of the poets – from Donne to Sidney – stare back like a dandyish row of security guards. If you don’t know your fucking poesie you’re not getting in mate. 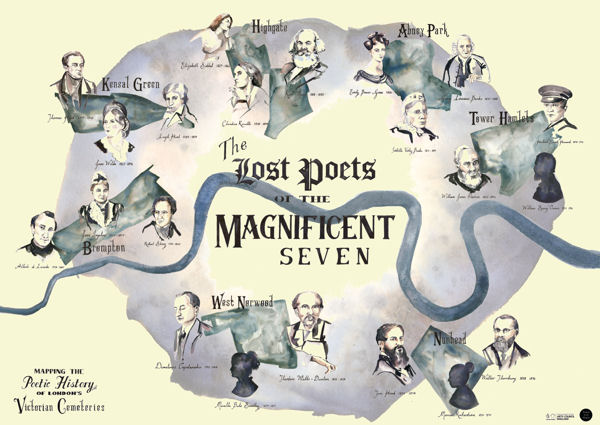 Cenotaph South developed an ecosystem and avifauna which matches perfectly the landscape of Nunhead Cemetery, which is basically an urban forest with Victorian heritage. One of the Friends of the Cemetery described going into a particularly wild section of the cemetery to clear some weeds from around the graves and got lost for an hour. This landscape did, in the end – and as I’d hoped – become the heart of the book, allowing me to achieve my original aim of locating the dead poets buried there. All twelve of them. They range from the weird to the frightening – the insane to the playful – and amongst them lies literary brilliance. There’s Richard Alfred Davenport who was found dead at his desk, aged 75, from an opium overdose. Thomas Hood, son of Tom, who created Fun magazine and who Lewis Carroll was suggested to have plagiarised. And my favourite, London chronologer Walter Thornbury – the Iain Sinclair of his day – who promised to write about ghosts in his book Haunted London only to find that the ghosts he was writing about was dead poets. A parallel project to mine. The best poets make the best ghosts as they specialise in asking questions in new ways – questions hover longer in the air than assertions.

My favourite chapter in the book is the one that explores Charlotte Mew’s relationship with the cemetery through the death of her brother Henry, who’s buried there. Her poem ‘In Nunhead Cemetery’ captures these decentred acres of suburban London like no other; this landscape on a hill, fifty metres above sea level, which looks back on the city that seems to capture the ideal past of each of its buried poets. London promises. When you get to the top of the cemetery you can see, through the trees, St Paul’s Cathedral. Everyone should go there at least once, the dead poets don’t get as many visitors as you’d think.

Cenotaph South: Mapping the Lost Poets of Nunhead Cemetery is out now in paperback. Get a free illustrated poster map when you buy from our online shop.