Like a cross between the Guardian’s Writers’ rooms and MTV Cribs, our new ‘Where I write’ series brings you up close and personal with the furniture of our authors’ lives to discover where – and how – the magic happens. In this first episode, we are invited into artist and writer Abi Palmer’s south London flat…

Hi Abi, so where do you write?

Oh god, everywhere. Currently I write in a very messy corner of my living room at a desk facing a wall, which we painted an oppressive grey during Lockdown Season 1. I took down a notice board which had amassed years and years of fragments of my life – now my kittens use it for climbing in the hallway. 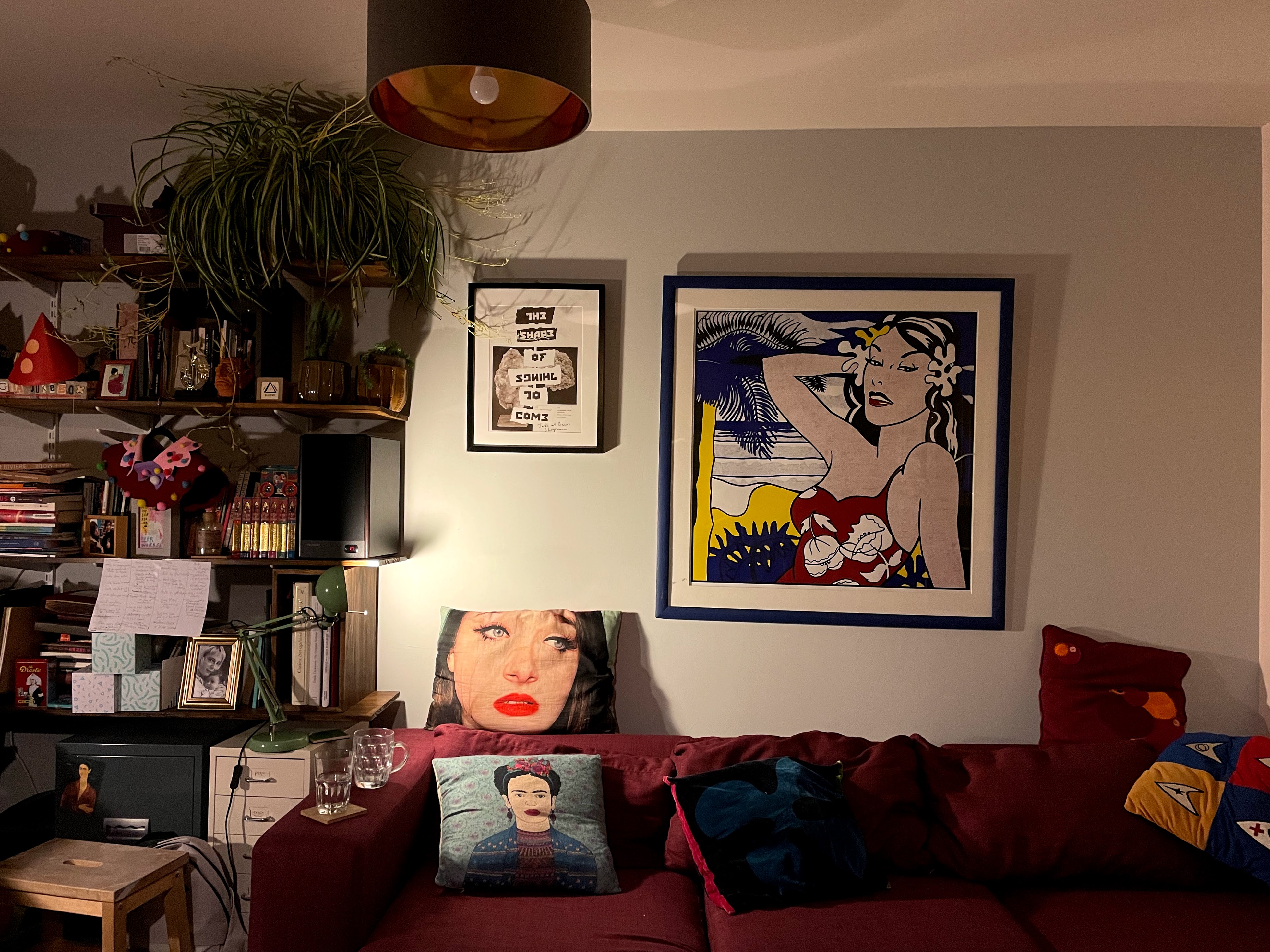 My desk is right next to my old friend, the sofa, where I collapse into a reclining heap when sitting up becomes too much work. I also write in bed, on the balcony, and (more often than I should admit) on the loo. I leave voice notes and memos for a transcriber to type up when I’m scooting along the Thames. When I can, I head to my very busy studio, where I’m surrounded by bits of my installation Crip Casino. Whenever I can, I write in my famous blue inflatable bathtub.

Over lockdown, I have tried very hard to switch my routine from being a night owl to waking up in time to maximise daylight. On an ideal day I’d read over breakfast and then sit on the balcony or at my desk and bash out a couple of pages. Having said that, my writing routine is incredibly variable: often I can’t and don’t write for weeks, but then work very intensely until it’s impossible to keep going. I try not to, but very often I’ll finish a thought in bed late at night under the covers on my phone.

My home workspace is covered in an embarrassing number of things I haven’t quite decided what to do with yet. At the moment I am surrounded by several balls of wool and some cat treats, a pop-up lantern of Jeremy Bentham’s head, an African milk tree and a sansevieria. I can see several pairs of scissors, and two bottles of nail polish remover. I try so hard to curate a stimulating and creative environment but this is at direct odds with my natural tendency to never put anything away. 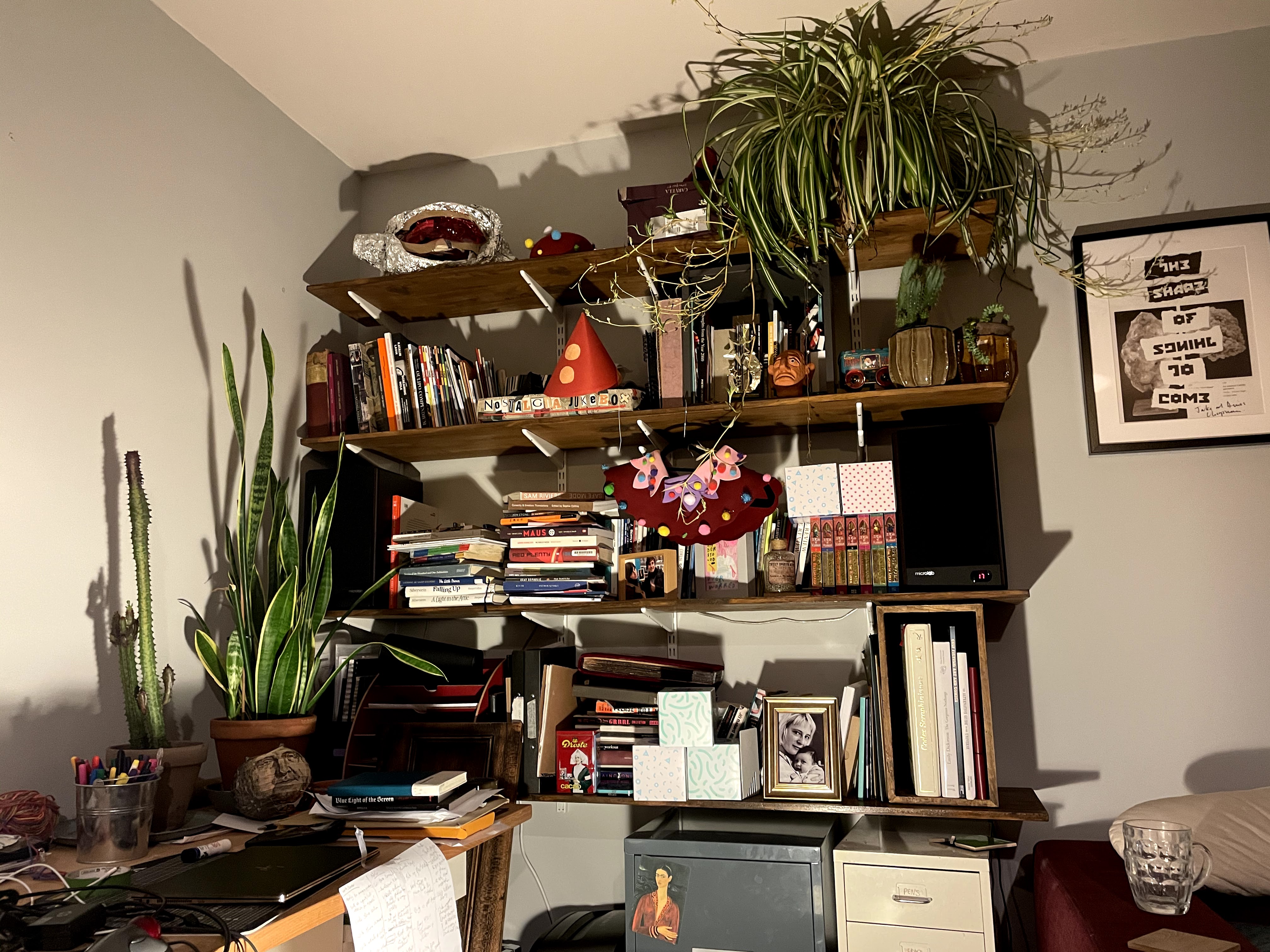 Next to my desk is a set of shelves that were put up by my friend David when we first moved into this flat. They are covered with more beautiful and meaningful things – clown costumes I have made for myself and a lot of clown paraphernalia, old interactive projects including Alchemy and Nostalgia Jukebox. My most prized piece of art is there behind multiple clown ruffs, it’s a piece called ‘Overworked and Misunderstood’ by Joy Yamusangie. There’s a stack of books – the ones I leaf through the most on a regular basis are currently stacked right next to every children’s book I still own, after a half-arsed attempt at Marie Kondo. There’s also a huge spider plant which my kittens are obsessed with. Recently I showed a long distance friend a photo of the shelves as an example of what a creative, stimulating environment I inhabit, and she texted back ‘wow, this is my worst nightmare.’

On my desk I also have many of the tools I need in order to survive the physical constraints of the writing process: a pot of constantly heating paraffin wax, which I dip my hands into after my writing day is complete. Underneath it is an infrared light for heating my sore hands, and an electric back massager along with a bunch of spiky massage balls. Everywhere I go I shed many many layers of compression bandages and gloves. 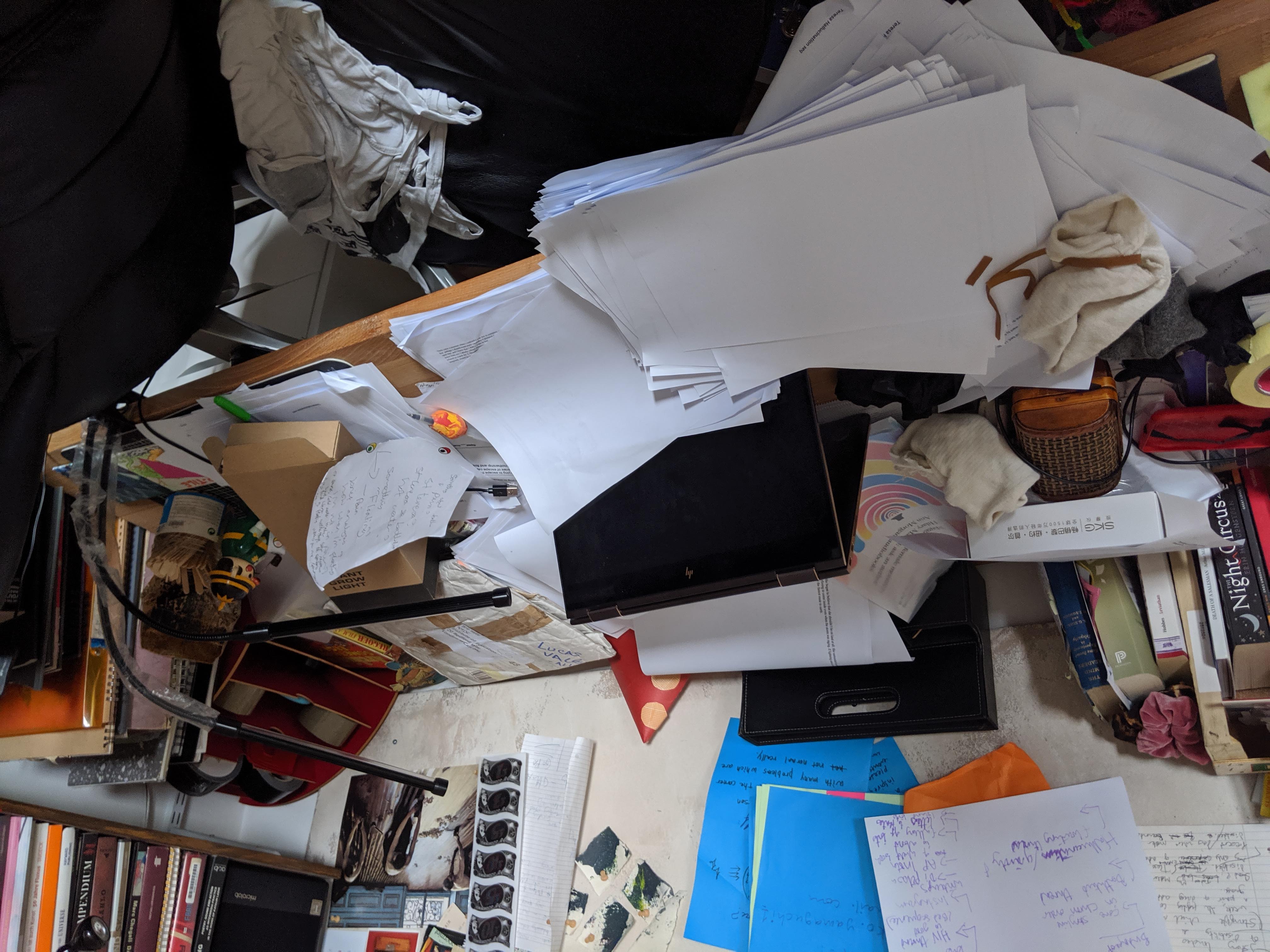 Writing is an incredibly physical process and I can never not be reminded of this, even when I’m in the middle of doing it. The pens on my desk are wrapped in padded tape to help me grip. I use a touchscreen computer as well as dictation tools whenever I can.

I type on my phone a lot using Google Docs, where I have never once changed the font from whatever basic bitch text they give you. I also write a surprising amount by hand, where my handwriting can only be described as “must try harder.” It generally depends how much pain I’m in though – I start out fairly neat and end in an aching sprawl.

How has your writing space/practice changed over the years you’ve been writing?

My writing practice and space are very centered around the intrusion of physical pain. When I was writing Sanatorium, I struggled to balance the task of writing with my other experiences of being cared for and requiring medical treatment. A surprising amount of it was written whilst I was hiding in the bathroom.

Since I’ve been given more practical support by Arts Council England and Access to Work, I’ve been able to dictate more of my writing process, which has been transformational in terms of both my written voice and my output. I am An Excessive Talker™ so there’s a lot of material, but you often don’t get to look back at it for weeks after you recorded it, and it requires much tighter editing.

When I write by hand I think with an entirely different part of my brain. It’s more of a muscle reflex – a very automatic and unconscious process. That’s where my most surprising and unexpected narratives come from. For instance, I wrote the Van Gogh story from Sanatorium while I was in my inflatable bathtub, balanced precariously over the edge.

Over the years I have noticed that I’ve written and rewritten some of the same ideas over and over again in numerous notebooks, constantly revising and rewriting, but rarely finishing the thought. When I decided to accept into the intrusions of my physical pain and employ fragmentation as a narrative device, I found it much easier to piece together some of these retellings, and gave myself space to jump between different voices and registers. Rather than try to complete one fully formed idea, I found space for multiple viewpoints. I feel that my completed texts are more reflective of my lived reality, a ruptured, ever-changing, and much more tangled whole. 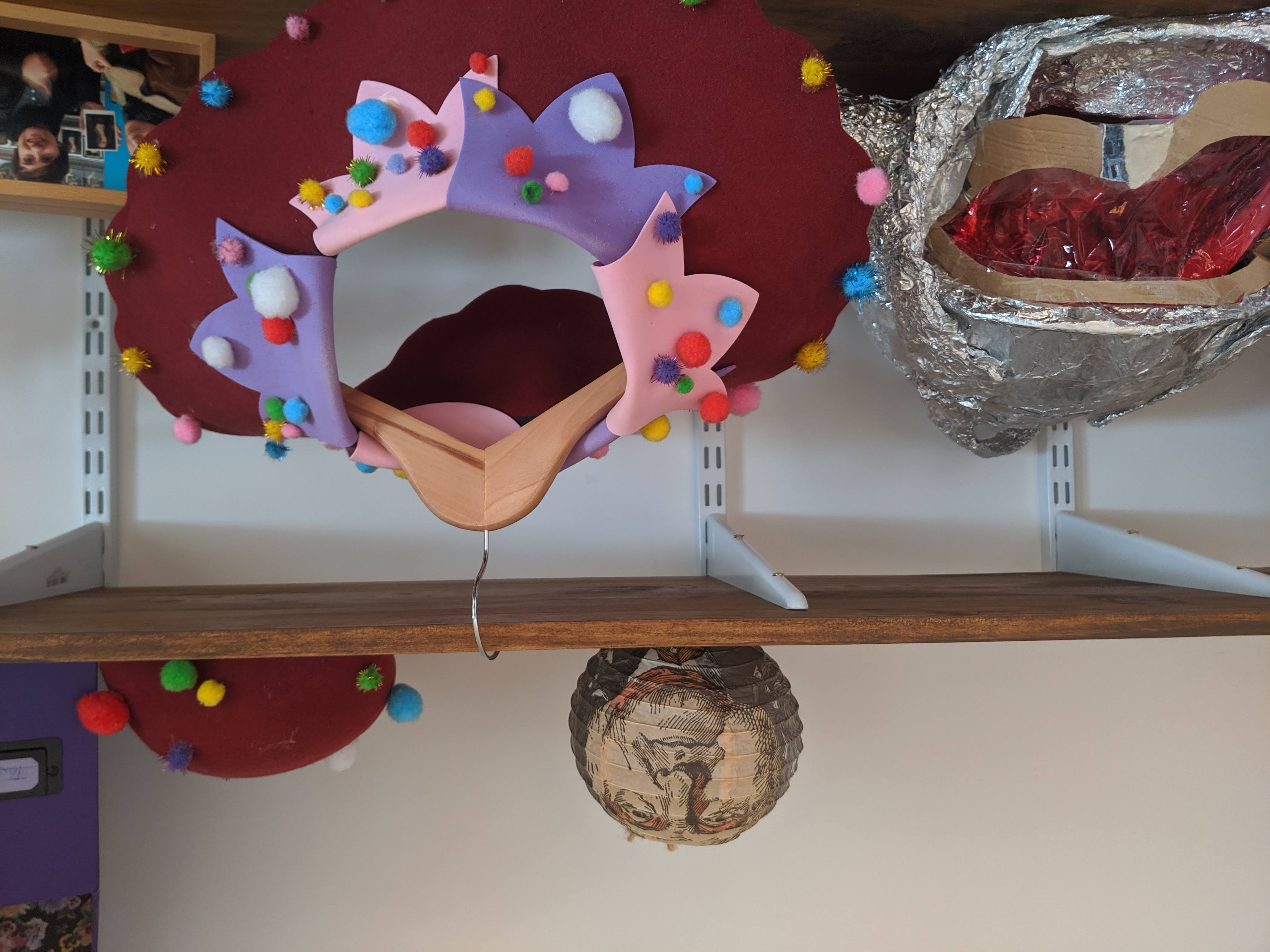 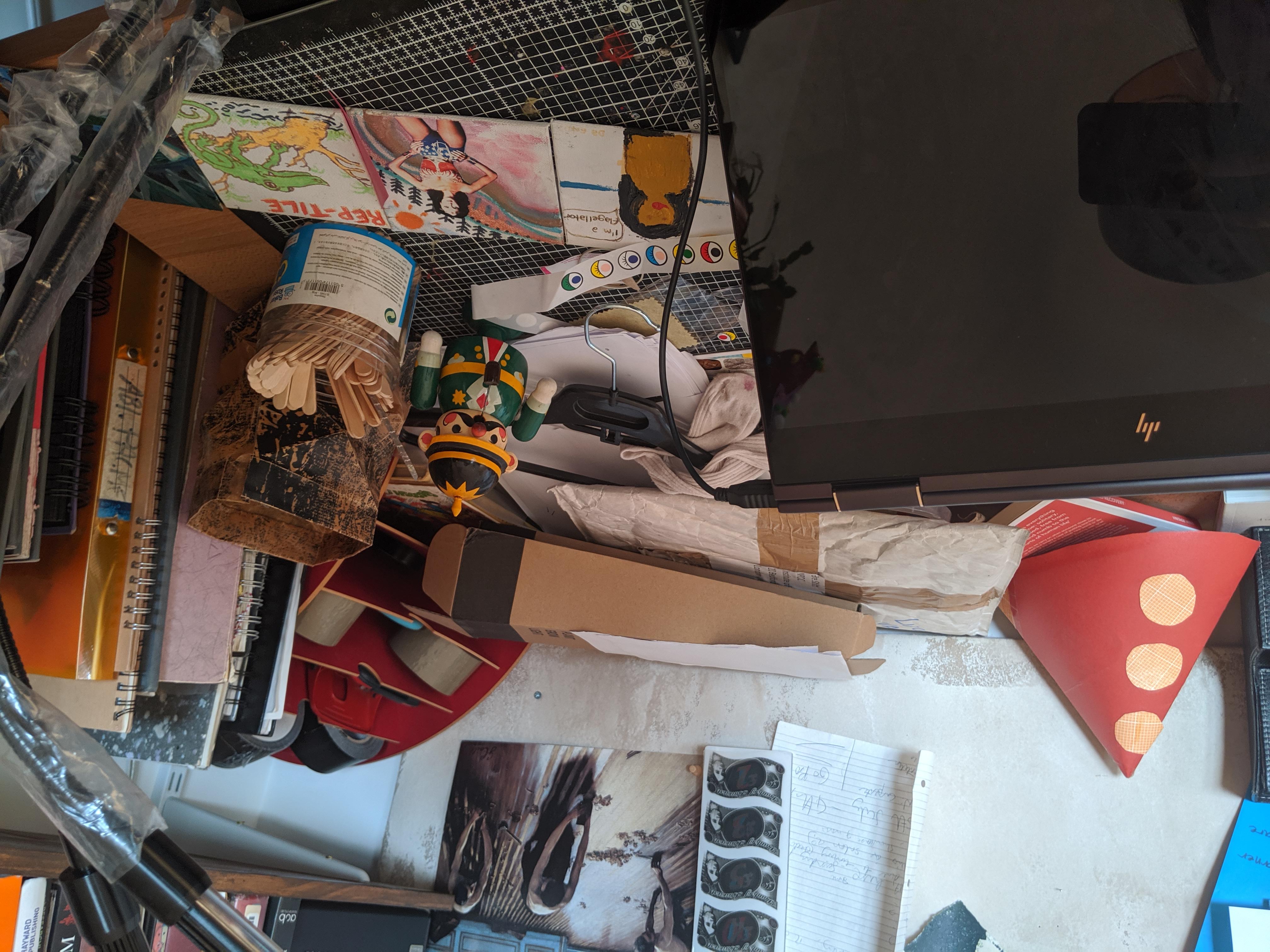 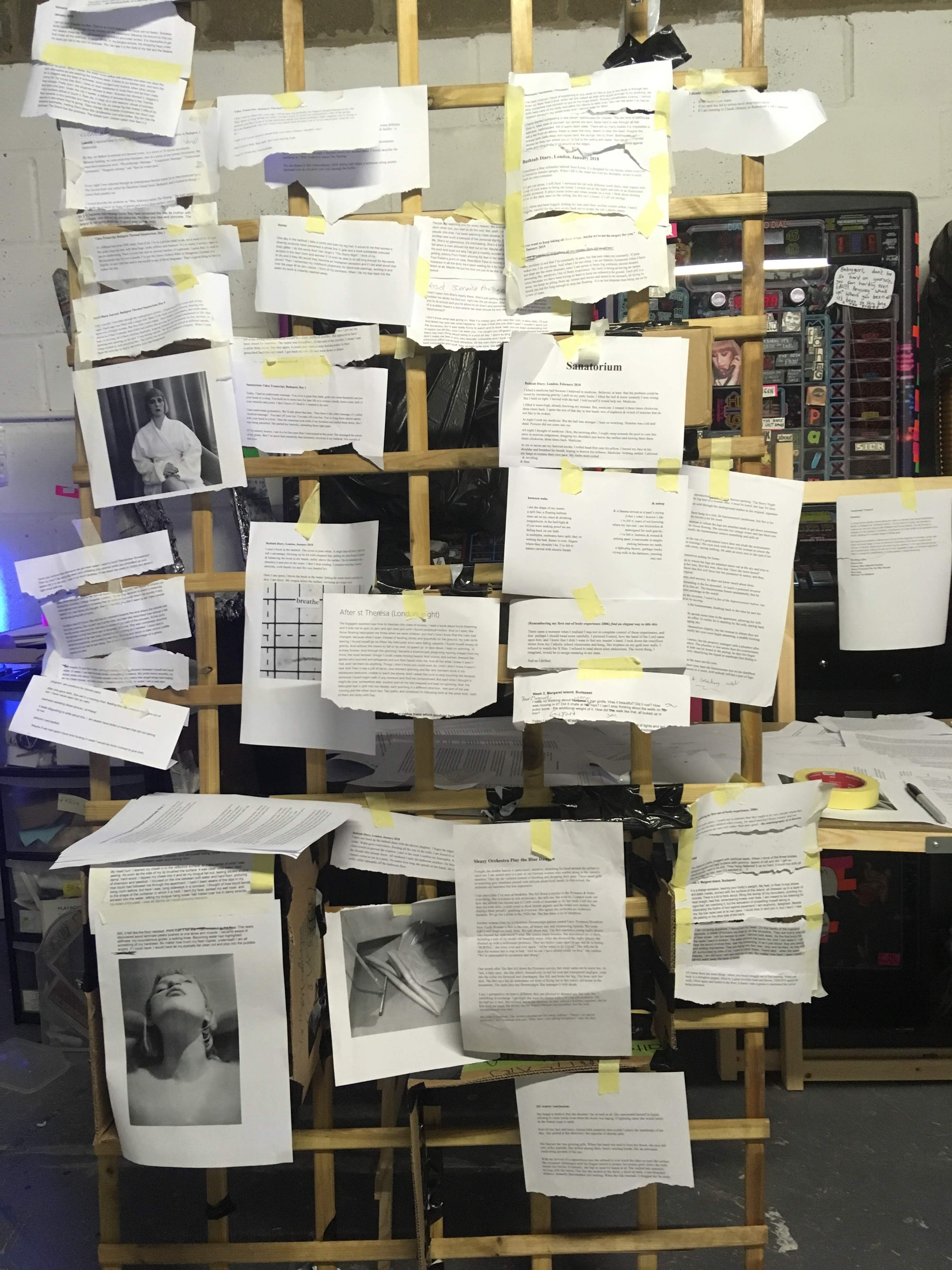 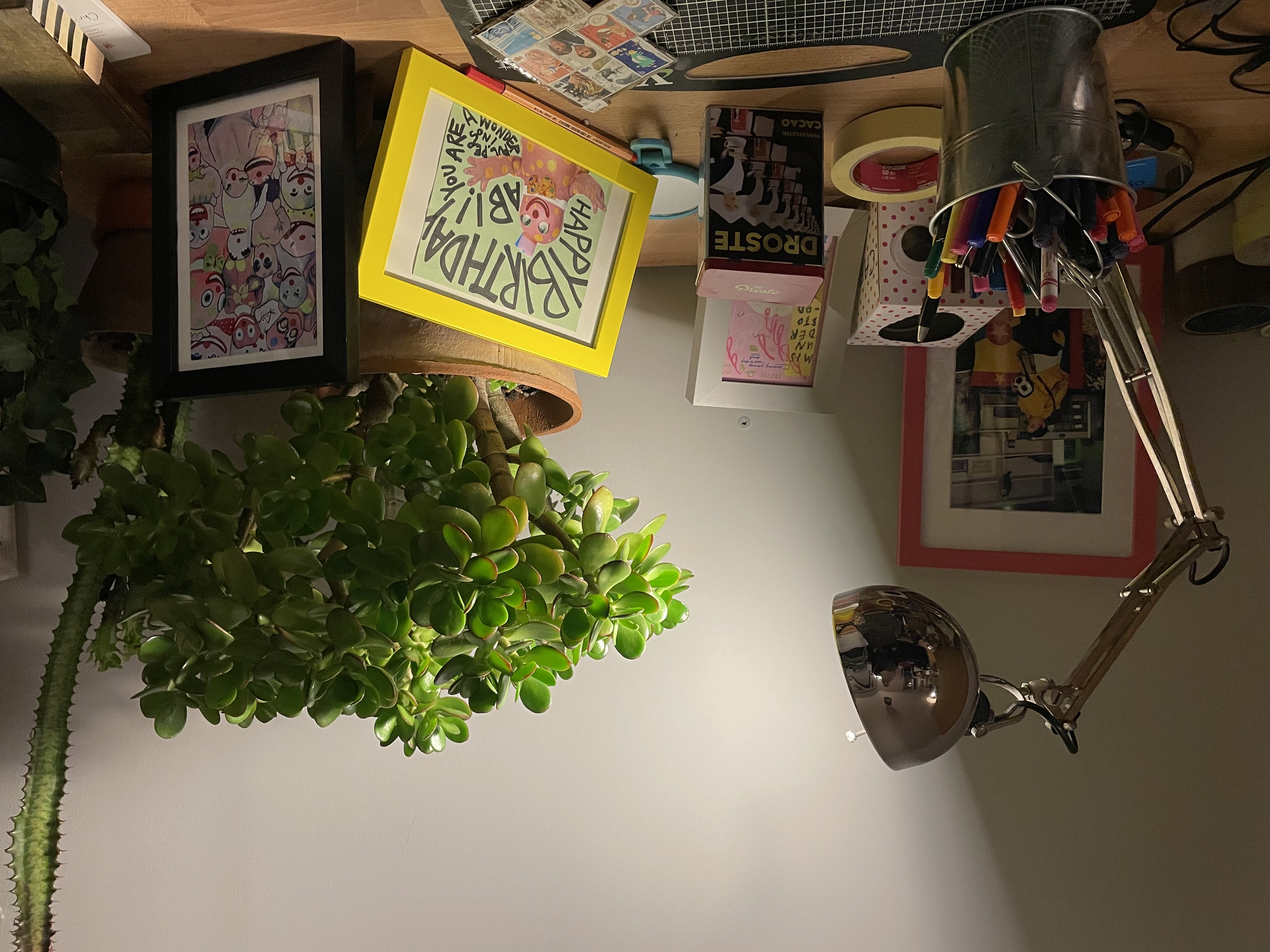 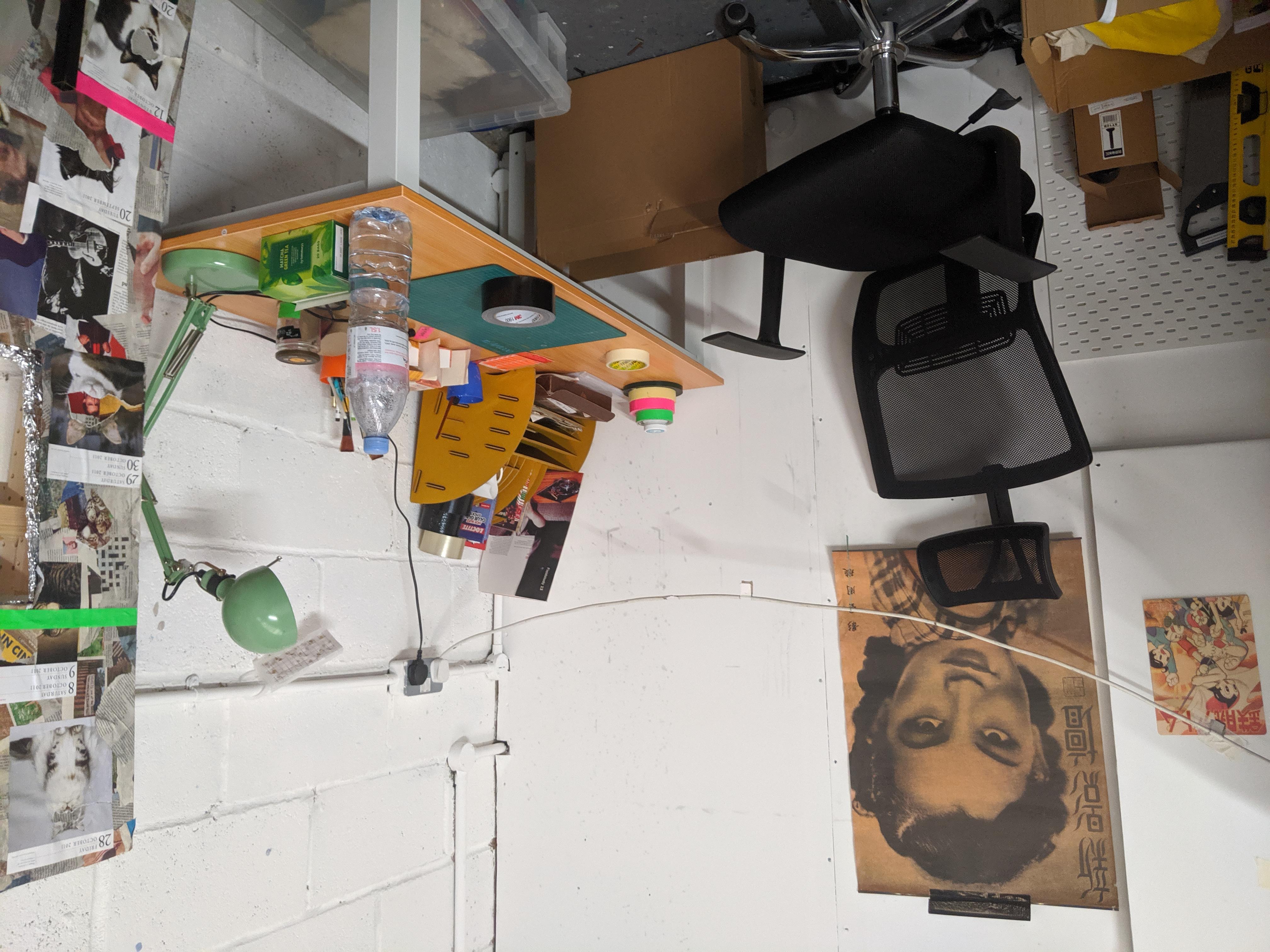 Abi Palmer's first book, Sanatorium, was published by Penned in the Margins in 2020 and is longlisted for the inaugural Barbellion Prize.