Like a cross between the Guardian’s Writers’ rooms and MTV Cribs, our ‘Where I write’ series brings you up close and personal with the furniture of our authors’ lives to discover where – and how – the magic happens. In this episode, poet Luke Wright leads us off the ‘sunken roads of southern England’ and into his Suffolk cottage.

Hi Luke! Where do you write?

I live on the end of a terrace in Bungay, Suffolk. My cottage is about two hundred years old, complete with the odd dark wood beam and sagging ceiling. The downstairs is open plan, and in the front part of the house I have my office space. 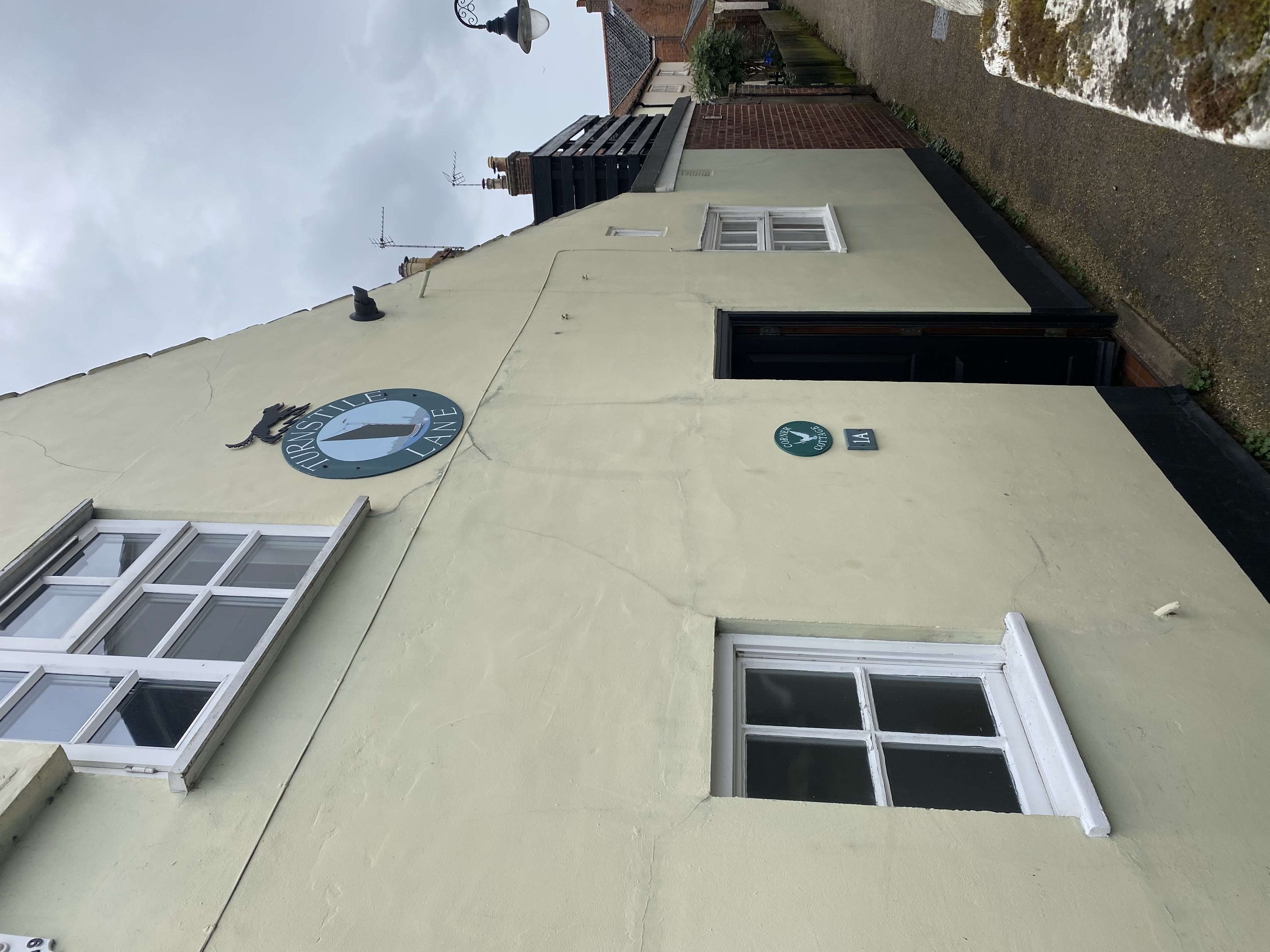 My desk sits against the front wall of the house, it’s an enormous roll-top that my parents bought me for Christmas about eight years ago. It used to live in a farmhouse in west Norfolk. When I first got it I found a yellowed sheet of A4 with details of a 1975 potato crop.

This past year I have written almost exclusively at this desk, but until the pandemic and lockdown hit I wrote as much on the road as anywhere else. I used to do most of my writing on trains. These days I tend to drive to my shows as family commitments demand I get home more quickly, often in the dead of night. I have written poems at hotel desks, in lay-bys at the wheel of my car, and above the motorway in service station bridge cafes as traffic thunders below me.

I try to keep my desk tidy. As well as writing I use this space for broadcasting from and recording demos. There are random bits of recording equipment, a few poetry collections, tea cups, my wallet. On top of the desk, looming over me, are the few awards I’ve won during my career and a couple of the little presents my publisher at Penned has given me on publication day (a die-cast Mondeo, a London Underground branded water bottle.) 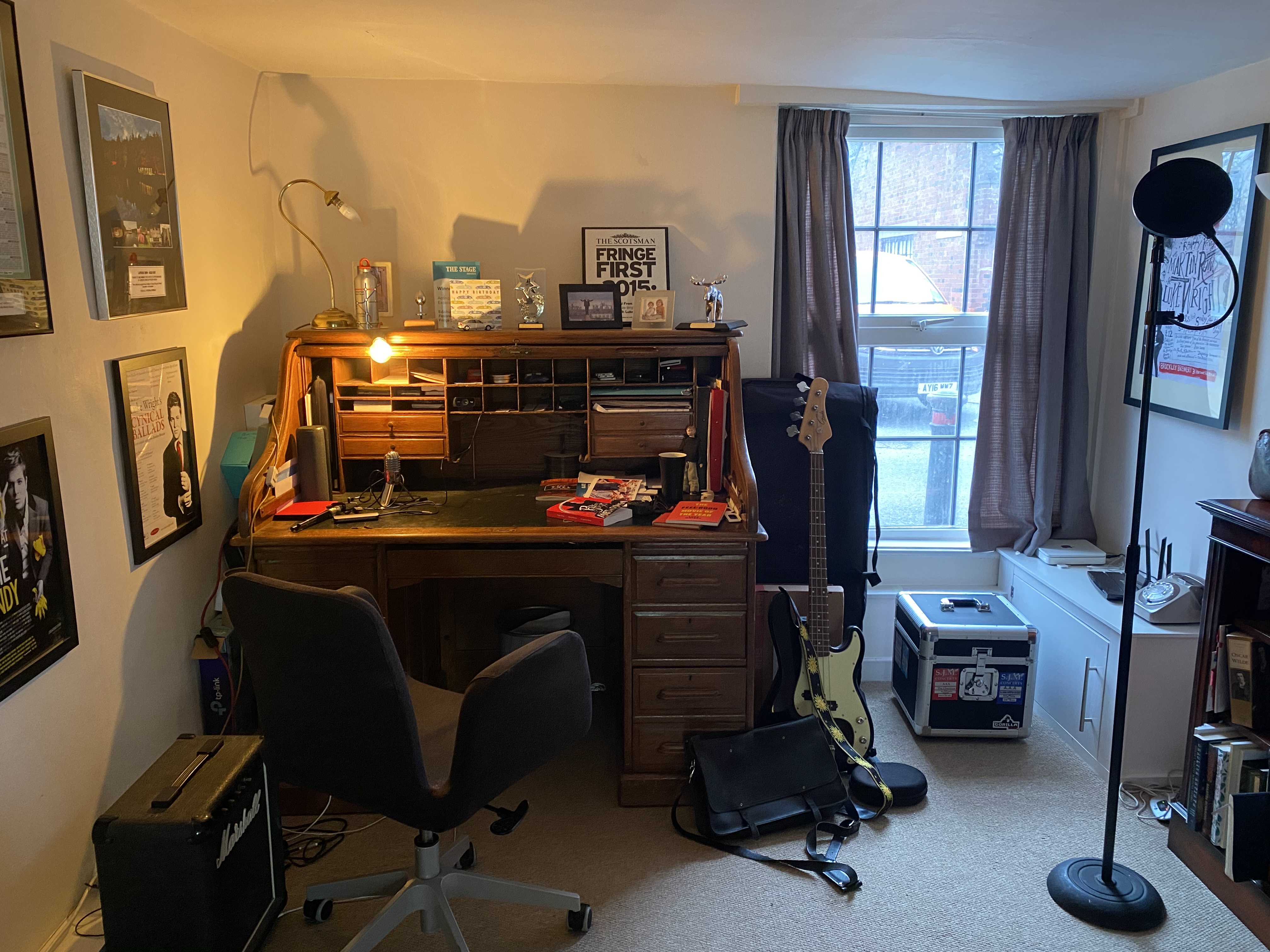 My office is full of memorabilia from my career. There are old posters, illustrations, even a Luke Wright cushion that I was given at a gig. I see it as a way of remembering this journey I have been on, mostly alone, but I concede it could be viewed as a tad narcissistic. Mea Culpa!

I am certainly not the sort of writer who can open a bottle of red and write into the small hours. I was always very jealous of my friend John Osborne, who would take a notebook to the pub and flesh out the best part of an Edinburgh show whilst downing a few pints of lager. That fits with the romantic, Kerouac-y image of the kind of writer I wanted to be when I was younger.

But alas, for me writing is a sober business. It is also the most taxing thing I’ll do all day, so best attempted before anything else. Ideally I’d wake about 6am, walk for an hour, get down to work at 7am and write for two completely undisturbed hours. But that happens once every couple of months, if I’m lucky. 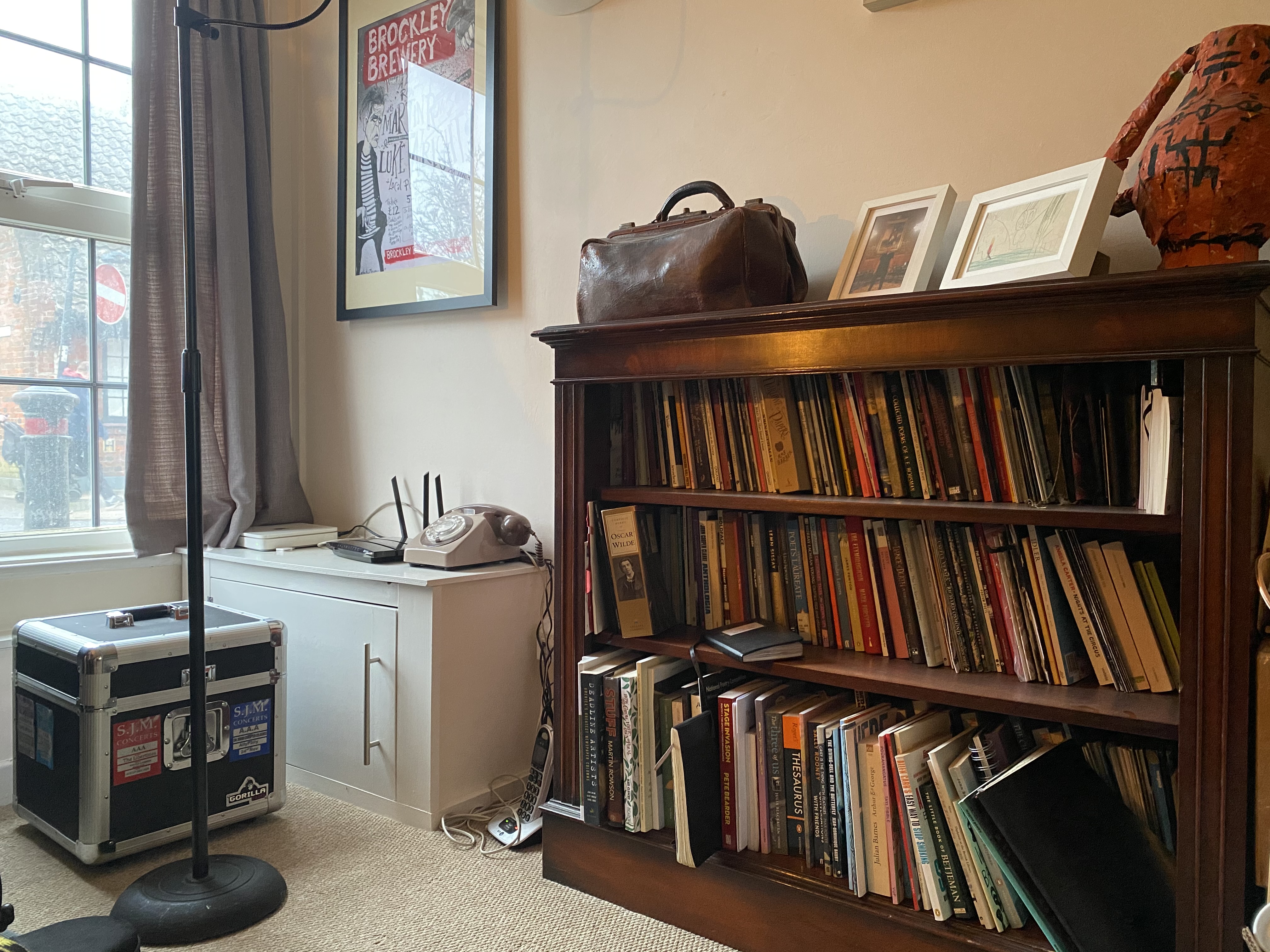 During lockdown I’ve learned to fit my writing around homeschooling, often getting some time in after lunch when the kids are done with their lessons and happily gazing into a screen upstairs. But I find by then my clarity of mind has been disturbed by the day and it’s harder to find the right notes.

This is very important! I usually start in whatever the default is, Arial, I think, and once I feel I’ve got something worthy down I allow myself the pleasure of expanding the spacing to 1.2 and dropping the text into Baskerville. I used to use Book Antiqua, and Garamond is passable. Poetry should be in a serif font. Anyone who disagrees is a barbarian!

When I first began writing as a teenager everything was written long hand into notebooks. I have kept every notebook I have ever had. There are some sublimely awful pieces in that archive. But since about 2002 I’ve written primarily on my laptop.

However, about two years ago I felt something needed to change. The first poems I wrote for The Feel-Good Movie of Year were written by hand in an A4 lined Moleskine. The process produced a different kind of poem (shorter, more personal). I now feel able to write in that way on my laptop (the benefit is that it’s much easier to edit) but I don’t think I’d have developed this style without using the notebook. 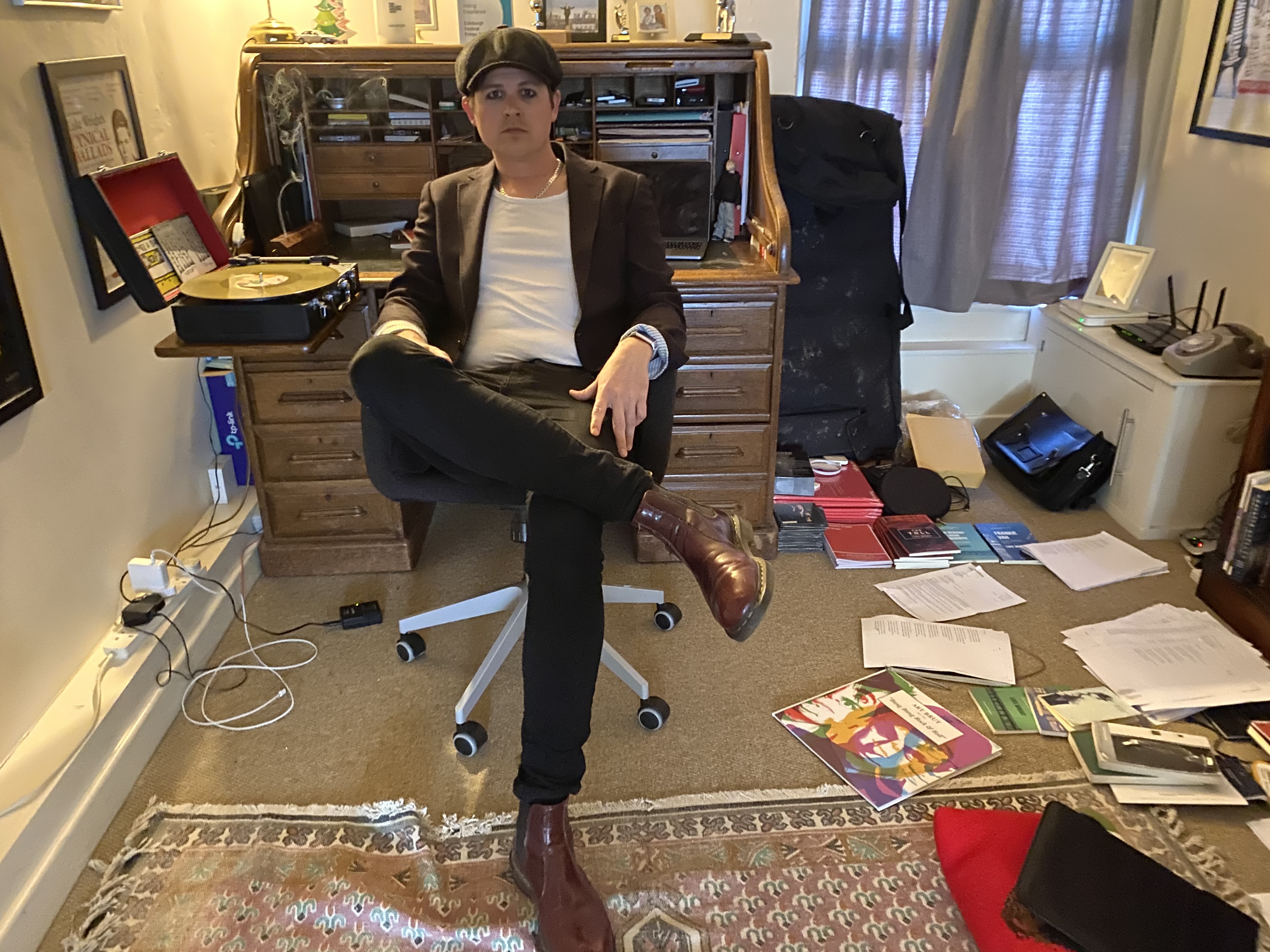 I record ideas as voice memos a lot of the time while driving or walking. A couple of the poems in this new book came out almost fully formed in the voice memo. Line for line they were pretty cliche-ridden but the basic shape of poem was created in audio form, the way I side-step from one idea to another is entirely down to the immediate way the first draft was created. I wonder if anyone could guess which two poems they are?

Luke Wright's latest collection is The Feel-Good Movie of the Year. 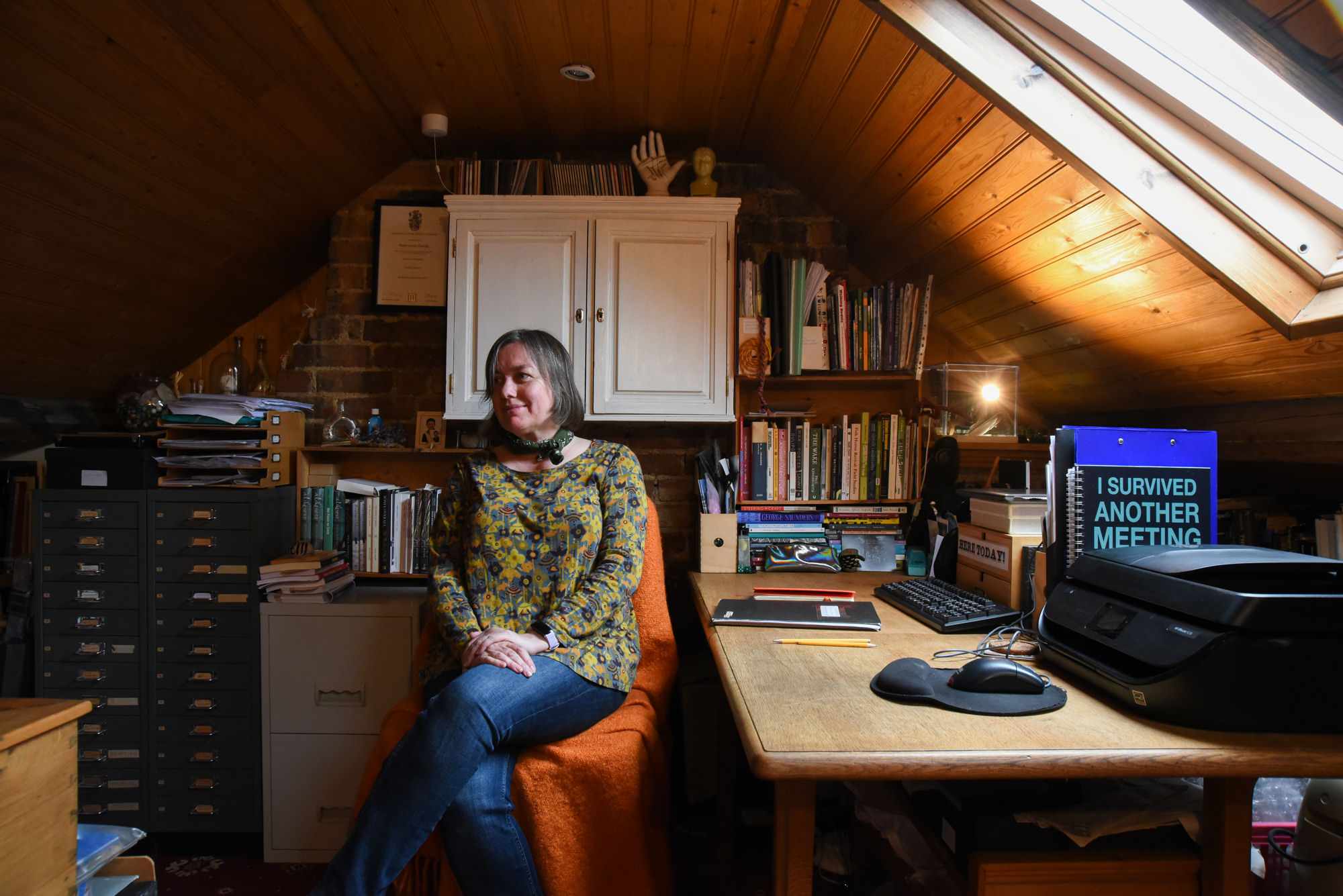