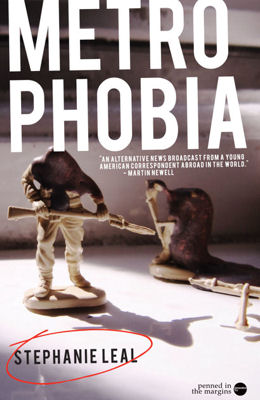 From urban sketches of London and warped love poems to a paean to the Boston Tea Party and a letter to an American in Afghanistan, Metrophobia establishes a poetry that is inventive, quirky and packed with humour.

From urban sketches of London and warped love poems to a paean to the Boston Tea Party and a letter to an American in Afghanistan, Metrophobia establishes a poetry that is inventive, quirky and  packed with humour.
.
Stephanie Leal’s satirical verses, visual poems and prose chunks gnaw at the edges of pop culture and the everyday. Her language twists and turns in unexpected ways, revealing a bold new writer ready to ‘french kiss life square in the mouth’.

“This is a demanding, rewarding, refreshingly iconoclastic and earthy collection of poems for the way we live now.”
John Field, Poor Rude Lines

“A searching and resourceful imagination is at work here, seeking new perspectives with vitality and insight.”
Penelope Shuttle.

“Leal [is] playful, experimental, questioning of ‘poetry’ as a specialised, rarefied state enjoyed only by sensitive types, her poems with a touch of theatre and bravura”
George Szirtes.

“These poems are an alternative news broadcast from a young American correspondent abroad in the world. Contained within them are many of the domestic and emotional snippets which CNN will never give you.”
Martin Newell
.
“The poems turn familiar tropes and warp them into new, peculiar shapes; the one-night stand becomes a defiant one, stories of her grandfather take a hallucinatory turn. Stephanie Leal’s world is one where preconceived ideas unravel suddenly, leaving a strange and unfamiliar territory behind them. […] She is neither militant nor fawning – a struck bell that demonstrates a romantic but pragmatic spirit.”
Andrew Spragg, Mad Dog 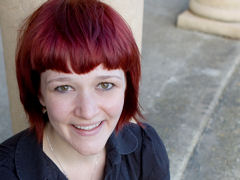 Stephanie Leal is originally from New Jersey, USA. She received her MA in Creative Writing at the University of East Anglia in 2007 and is studying for her PhD in Philosophy. She currently lives in Norwich. www.stephanieleal.co.uk

Find out more about Stephanie Leal