The Bells of Hope 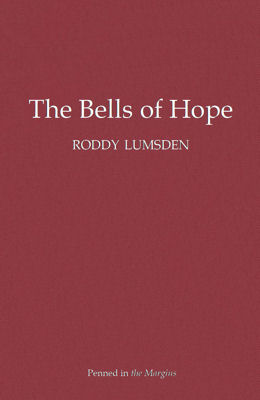 A series of 51 poems, all of them in a short form developed by the author, in which metaphor and truth swirl in one short and three long lines.

The meat was darker
when I was younger and sleeping. What ticked at the far edge

of my luck? That more of the meat was dark. Where my head

woke in the pillow was the magnetic centre of a subtle county.

The Bells of Hope is a series of 51 poems, all of them in a short form Roddy Lumsden has developed, in which metaphor and truth swirl in one short and three long lines. Lyrical and curious, these poems, though stand-alone, collectively chart a time of change in the poet’s life, delighting in unusual words and tumbling images, in poems whose titles run from A to Z and back to A.

Printed in a hardback limited edition of 200. Each copy is numbered.

“Each [poem]  has the feel of something completely compressed, like a car crushed into a cube, except that somehow all the individual components have survived and are interlocking perfectly. Strange little machines, then, but working to somewhat secretive ends.”
Jon Stone, Dr Fulminare

“The Bells of Hope inches more toward revelation than concealment and his language is more heady than ever. It is a breathtaking account of a dark night.”
Kathleen Ossip, Attention Span 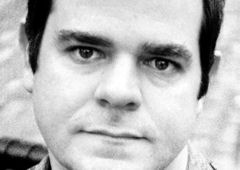 Roddy Lumsden has six previous collections including Mischief Night: New & Selected Poems (Bloodaxe, 2004) and Terrific Melancholy (Bloodaxe, 2011). He edited the anthology Identity Parade: New British & Irish Poets (2010), and co-edited The Salt Book of Younger Poets. He is a Core Tutor for The Poetry School, Poetry Editor for Salt Publishing and Series Editor of Best British Poetry. Originally from Fife, he now lives in London and has also worked as a puzzle, quiz and popular reference writer.

Find out more about Roddy Lumsden